The Day I Met Pat Summitt

I didn’t know Pat Summitt personally, but like thousands (if not millions) of young girls growing up when the Tennessee Lady Vols earned dynasty status, her influence touched my life.

Since her passing, many players, friends and fans have written remembrances documenting how her courage and determination blazed a trail for them to experience competitive sports—experiences that changed the course of their lives.

I echo that sentiment, with deep gratitude to Pat and many others who fought difficult battles that gave me the opportunity to compete as a high school and college athlete.

Though I never planned a professional career in sports, that’s the path that opened to me. And it led to some pretty amazing experiences—like the day I got to coach against Pat Summitt.

For years I led the Athletes in Action exhibition team that competed against Division I teams in an effort to help them prepare for their season. We attracted some excellent post-collegiate players and held a 3-week training camp to get ready for 2-3 week tours, during which we played nearly every day.

Top college coaches liked our reputation of being organized and prepared to give them a good game, and we typically had a schedule littered with Top 25 teams.

In 2000 we finished our schedule of something like 13 games in 17 days with a game at Tennessee. We were exhausted, but so fired up to compete against the strongest tradition in women’s basketball!

I coached our team that year, and made a big mistake prior to the game—I looked at the sports page. There’s a reason they say coaches and athletes shouldn’t do that!

I discovered that the Lady Vols had won their first exhibition game by 88 points! Yikes!

To say I was nervous was the understatement of the century. 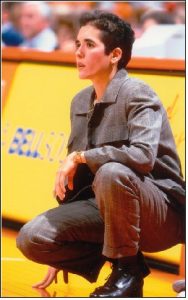 Stepping into the arena for warmups gave me chills. I soaked in that moment. All the orange. Rocky Top playing. All the people!

I want to say there were 5,000 fans there. Maybe it was 3,000. All I know is there was a lot of orange and no other team we played came anywhere close to drawing that many fans to a game that didn’t even count.

Pat came out to a standing ovation and shook my hand. Sometimes you know you’re in the presence of greatness. That was one of those moments for me.

To experience the fruit of Pat’s labor in that arena was surreal. She took something that no one cared about and turned it into a tradition that attracted fans in droves—even to preseason games.

I can’t imagine the amount of hard work, determination and perseverance the journey required. The number of disappointments she endured. The obstacles that impeded her progress.

I hope she looked back on the championships, and more importantly, the young girls she mentored into womanhood, and felt a tremendous amount of satisfaction in having offered the world her very best.

So along with scores of others, I say thank you to Pat Summitt. Her legacy will live on as those she inspired and taught continue to champion opportunities for women in sport.

Do you have a Pat Summitt story? I’d love to hear it! Shoot me an email with your favorite memory.

P.S. I read many of the tributes to Pat. These three really touched me:

‘The Game is Never Over’: A letter from Pat Summitt to a young basketball player, by Sally Jenkins

The Day I Met Pat Summitt appeared first on Life Beyond Sport.