9 Steps to Transforming Your Team Culture

May 10, 2016|Leadership
Home » Leadership » 9 Steps to Transforming Your Team Culture

Lenny Krebs has been coaching high school basketball for nearly 20 years. Last year was the first time he made team culture king. What he learned has had such a profound impact on his players and his coaching philosophy that he will never go back to his former ways. 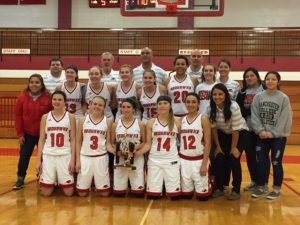 I met Lenny at the PGC/Glazier basketball clinic in Detroit. His story FIRED ME UP because I believe so strongly that when coaches put culture first, great things happen.

We talk a lot about team culture here, but sometimes it’s still tough to wrap our heads around how to actually build it.

Lenny gave me permission to write about the 9 steps he used to create a team culture that led not only to more wins, but more importantly to a transformative experience for him, his staff and their student-athletes.

I am PUMPED to share the specifics with you!

Lenny developed a big sis/little sis program in which he paired his high school varsity and junior varsity players with a 3rd-8th grade basketball player. They host breakfasts and other events for the “sisters” to get together throughout the year.

He had no idea how much his players would love this! They attended their little sisters’ games, even making signs to encourage them. It was a huge program-builder as the younger girls came to the high school games to support their big sisters.

Lenny attended a PGC clinic last year, and as a result felt led to rewrite his coaching philosophy.

After putting his thoughts on paper, he emailed his high school and middle school coaches to ask them what 5 things (not X & O related) they thought the program needed to have in order to be successful. 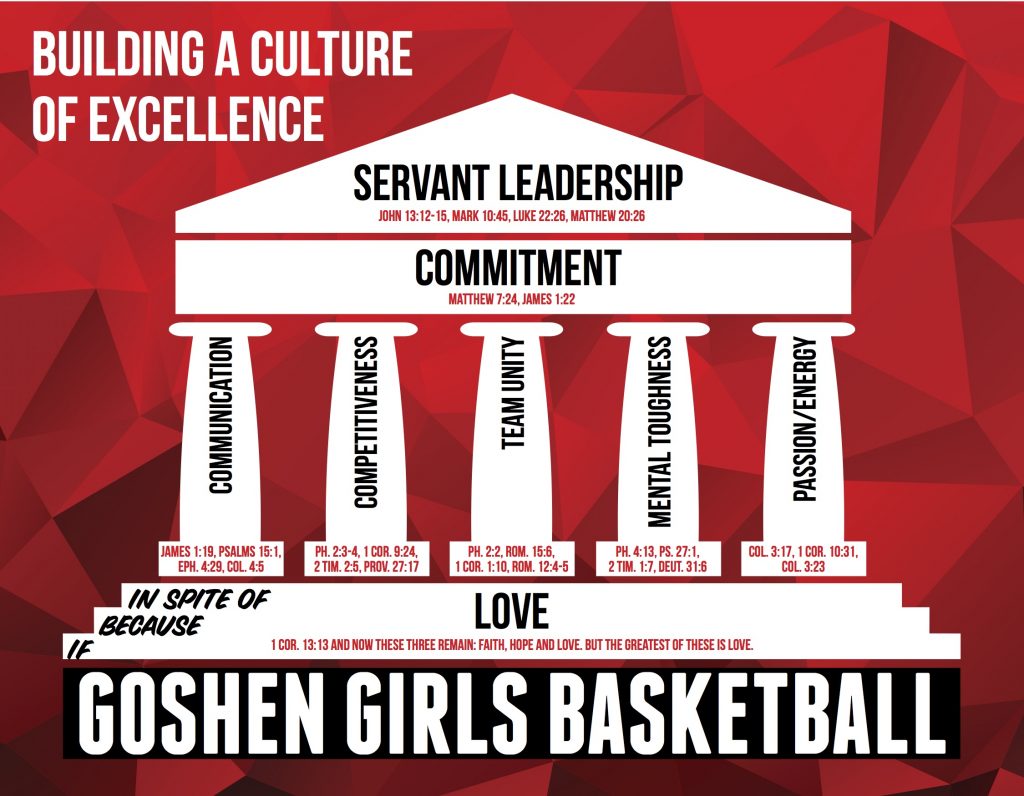 Lenny assigned a coach to each value according to their area of strength and then paired his 10 upperclassmen with one of the coaches. Players were aligned with a value of natural strength or one in which they needed to grow.

The pairings were intentional, with one player who was stronger in that particular value joined with one who needed to get better at it. In order to groom leaders for the future, none of the groups had two seniors.

During the summer, each group read a Jon Gordon book that addressed their value and met weekly to discuss what they were learning:

Last June, the team headed to a nearby university for a 3-day retreat. In earlier years, the team practiced 9 times during the retreat. 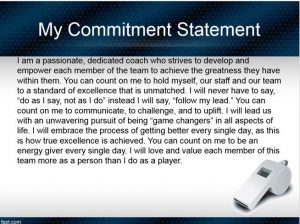 Then he gave the assistant coaches and players an opportunity to individually write and share their commitment to the team.

He had no idea how meaningful this exercise would prove to be!

The player commitments were stronger than anything he would have asked of them. He still gets goosebumps talking about the experience—a transformative moment for his team!

Tryouts for the team landed during a fall break week, which proved helpful in furthering their burgeoning culture.

When they began two-a-days after tryouts, one of the sessions each day was designated for team building.

The coaches assigned each player to a core value group, the ownership of which shifted, as the players who had been trained over the summer now led the groups while the assistant coaches served as a resource. 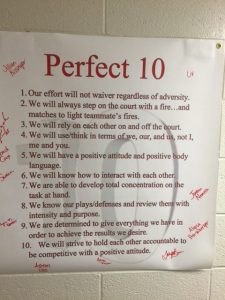 Each core value group chose two non-negotiables that they believed the team needed to have in order to become successful (not regarding wins and losses, but rather about who they said they wanted to be). In addition, they discussed what these standards of behavior looked like on and off the court.

As it turned out, the players came up with a more specific and demanding list than Lenny would have created.

What they deemed the “Perfect 10” became their rulebook and suddenly discipline matters became easy. Lenny just pointed to the “Perfect 10” and held them accountable to the tenets they created!

The point of emphasis each day in practice used to be more about skills, but last season it was attached to a value.

If players weren’t communicating in practice, for example, Lenny would challenge them on it and the ones in the communication core value group would take it personally. They initiated player huddles to encourage one another to step up in that area.

They became active participants in motivating the team toward living up to their values! They owned it.

Every week or two they would take a practice time and use it for a team culture meeting.

Two core value groups would present something relevant about their area to the rest of the team. The assistant coaches helped the players with resources, but Lenny took a step back and let the team own the process.

Sometimes they would even pull the freshmen into these meetings to help them learn the values and expectations.

On the varsity team, one assistant served as the offensive coordinator and the other as the defensive coordinator. In addition, each was assigned half the players on the team. When one of their players came out of a game, they were the only coach to address her. 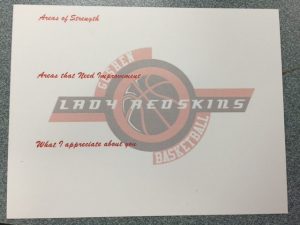 Each week during the season, the assistants wrote a note to the players in their group, and Lenny
wrote a note to each player on the team, using this custom stationery.

In addition, each player was assigned a weekly practice partner to whom she would write a note of encouragement. These pairings rotated during the season.

The notes from coaches and teammates were taped to the front of their lockers and by the end of the season the lockers were covered with cards!

One of the glitches was that when things got busy in January, they stopped writing the notes—you can be sure the players noticed and said so!

So what happened as a result? You probably are itching to know about the wins/losses, so I’ll give you that first.

Winning is obviously fun and one of the reasons why you coach. It’s important. I get that.

But ancillary results like these proved just as important:

One of Lenny’s players suffered a torn ACL early in the season, but because of the culture she stayed locked in to the team.

As part of the competitive core value group, she attended all practices (unless she had rehab).

Rather than sulking on the sidelines, she stayed engaged—urging her teammates on toward a higher level of competitiveness.

She embraced her role because she realized that she could contribute despite her injury. When the players voted on awards at the end of the season, she finished in the top 3 for both the mental attitude and teamwork awards even though she didn’t play a minute. Impressive!

Focused on the Process

The clear vision provided a compass to keep everyone aligned with a purpose larger than themselves, particularly when adversity struck.

After the team lost back-to-back games in December (by double digits), Lenny encouraged the team by referring back to their culture (see text below, left).

When the school board voted to change the school mascot in the middle of the season, the distraction could have caused the team to lose focus.

Instead, the vision and values provided the framework to help the team to stick together and overcome (see text below, right). 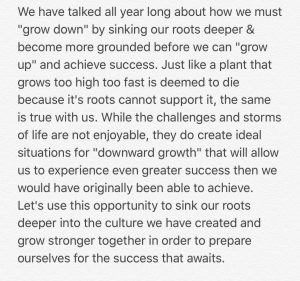 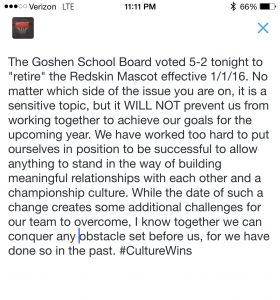 The team learned that no matter what type of adversity came up against them—they could rise up to overcome it together.

The best part was that putting culture first made me a new me, a better me.

He had a blast coaching last season because the culture freed him up to coach—to focus on the X’s and O’s.

It reduced the amount of team drama to nearly nothing and allowed him to fall in love with coaching again.

The whole team—players and coaches alike—enjoyed an amazing team experience!

7 Reasons Why It Worked

1. Opportunities for the players to develop relationships and have fun (big/little sis program, core value groups, feedback cards) inspired them to want to participate.

2. Clarity around his coaching purpose and philosophy kept him focused.

3. Core values centered the team. Involving the assistant coaches in their creation instilled more ownership. Defining the values made them crystal clear and designing a visual kept them front and center.

4. Writing down his commitment to the team and sharing it (so important that the leader go first!) and leading each team member to do the same created unity.

5. Investing time consistently in training team leaders through the core value groups gave them a voice in the process and ownership over remaining focused on the values, as well as accountability for the team standards they created.

6. Reinforcing the core values by emphasizing one at each practice and revisiting them in team meetings throughout the season kept them top of mind.

7. Creating a system for ongoing feedback gave players encouragement from coaches and teammates around areas of strength and needed improvement. Using custom stationery made it unique to the team and placing them on the outside of the lockers provided constant reminders that all were valued and still had room for growth.

As you can see, building a winning culture is a ton of work. But the remarkable rewards are SO worth it!

I’d love to hear which of these ideas you want to implement on your team—shoot me an email!

And if you have questions for the architect himself, Lenny would be glad to field them. He has since taken a job at Warsaw High School and you may email him at lkrebs@goshenschools.org.

9 Steps to Transforming Your Team Culture appeared first on Life Beyond Sport.