Confession: I’m a Coke addict. You might not believe me since I don’t drink a six pack a day or even a week. I feel like an addict, though, because of how I have used Coke.

I can find lots of “reasons” to have a Coke. Sad, lonely, depressed? Have a Coke (and a smile!). Happy, excited, celebrating? Have a Coke! No matter what the situation, I can justify it. The struggle is real, though, because I know it’s horrible for my insides. So I’ve gone without it for a month or two just to prove I could.

But in December 2014, the thought popped into my head to go a year without drinking Coke (or any soda). At first I ignored it—too crazy! But the thought persisted and finally, I relented. I didn’t tell anyone for fear that I would fail. But I made it 365 days without drinking soda! For me, that’s kinda a big deal.

So what does this have to do with leadership?

As leaders we want to inspire qualities like discipline, commitment and self-control in others, but it’s hard to do so if we don’t exhibit those qualities ourselves.

Exercising this self-discipline taught me some valuable tips to keep in mind moving forward. You wouldn’t be reading this if you weren’t trying to get better too, so as you think about the things you’re aiming for in 2016, consider:

#1—The power of focusing on one thing.

My body would benefit if I stopped putting a bunch of other foods and drinks I like in it! But my focal point last year was simply to stop drinking Coke. The simplicity of the goal helped me stay on track.

Rather than pursue growth in a variety of areas in the new year, try simplifying your list. You’ve probably seen folks posting on social media about choosing one word for their year—same principle. (The concept is outlined in the book One Word That Will Change Your Life).

As much as we like to pride ourselves on being great multi-taskers, research shows that we operate better when we focus on one thing at a time. Lock in on one thing and you’ll go farther, faster this year.

#2—Our mindset holds the key to success.

My focus gave me a new mindset, especially when eating out. Since I decided in advance that I wouldn’t drink soda, it was like in my mind I put Coke in a box, locked it up and threw away the key. Putting it out of my mind made resisting it easier.

It also aided my mindset to divide the 365 days into smaller chunks of time. Even though I made a 1-year agreement, I started out by focusing on not drinking a Coke in January. We can do anything for a month, right?

By the end of the month I had developed a new habit in my brain and just kept going, one month at a time. Before I knew what happened, the calendar hit June, then December!

Another trick that impacts mindset is learning to talk to myself rather than listen to myself. Author Jon Gordon shares about it in this article. It’s not rocket science, but it’s a life-changer at which I need to keep improving. 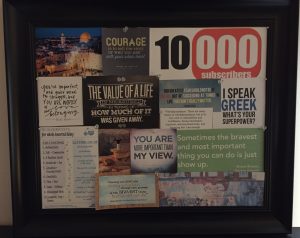 Your mindset toward whatever you’re seeking to do in 2016 is SO key. See the desired end result and use it as motivation, but remember to break it down into smaller chunks.

And when the doubts and negative thoughts come (because they WILL come), start talking to yourself. I put together a vision board (see right) with quotes to help me talk to myself this year.

#3—Transformational change comes when we deal with root issues.

I knew this going in. My Coke “addiction” is a habit I developed to deal with emotions. Many of us have coping mechanisms—exercise, food, shopping, coffee, etc.—to help us manage life. Though perhaps not bad in and of themselves, using them to avoid the root issues in our lives hinders transformational growth. We may feel better temporarily, but the root still exists.

As former NFL player and author of InsideOut Coaching, Joe Ehrmann, once said “If you want to be a better mentor—coach—leader, you’ve got to be a better you!” Becoming a leader who helps transform lives requires first experiencing transformation ourselves. —Tweet that!

We all have past hurts that influence our current behaviors. The pathway to growth traverses through those hurts in order to find healing. And from that wholeness, we can make a transformational impact.

I am a wounded healer and this is the story of my wounds, their healing, and the transformation in coaching that ensued because I chose to process and grieve over my pain instead of hiding it and acting it out. —Joe Ehrmann

Though I’m glad to have reached my objective last year, I want to get at the root issue by learning new skills to manage my emotions more effectively. My plan includes resources from Brené Brown and Pete Scazerro as well as the help of close friends.

What root issues are holding you back from becoming the coach or leader you envision? Taking time to explore and address them will make the biggest difference in your leadership.